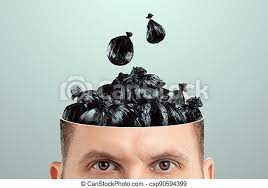 One day a man was going to the railway station by auto. The auto driver was driving the auto very comfortably. A car suddenly came out of the parking lot and came on the road. The auto driver applied the brakes sharply and the car swerved after colliding with the auto. The car driver angrily started calling the auto driver good and bad, while the fault was of the car-driver.

The auto driver was a satsangi (hearer-teller of positive thoughts). He did not get angry on the words of the car driver and went ahead apologizing.

The person sitting in the auto was getting angry on the action of the car driver and he asked the auto driver why did you let that car driver go without saying anything. He called you good and bad when it was his fault. We are lucky, otherwise we would have been in the hospital because of that.

The auto guy said, sir, many people are like garbage trucks. They carry a lot of garbage in their minds. Those things which are not needed in life, they keep adding hard work like anger, hatred, worry, despair etc. When their waste becomes too much in their mind, they start looking for an opportunity to throw it on others to lighten their burden.

That's why I keep a distance from such people and say goodbye to them with a smile from afar. Because if I accept the garbage dumped by people like them, then I too will become a garbage truck and will keep throwing that garbage on me as well as the people around me.

I think life is very beautiful so say thank you to those who treat us well and don't stay in the hospital. Some even roam around in the open around us.

Laws of Nature: If seeds are not planted in the field, nature fills it with weeds. In the same way, if positive thoughts are not filled in the mind, then negative thoughts take their place and the second rule is that he shares what he has. "Happy" distributes happiness, "Unhappy" shares sorrow, "Wise" shares knowledge, confused distributes illusions, and "Fearful" distributes fear. He who is afraid himself, scares others, suppresses, makes him shine bright, while the successful person shares success.